What is Ocean Acidification? (HS-Secondary)

Ocean and Atmosphere in a Box

Many experiments investigate the process of acidifying water by the addition of carbon dioxide or via a proxy acid, such as vinegar (acetic acid). However, this experiment specifically demonstrates the equilibrium process through which atmospheric carbon dioxide enters the ocean and decreases pH.

This experiment requires a significant amount of time to reach the equilibrium necessary to see a notable color change in the pH indicator. However, it demonstrates that when carbon dioxide increases in the air, it will be absorbed by water, which will then—through various equilibrium processes—cause ocean acidification.

The carbon dioxide is produced via Alka-Seltzer tablets in a minimal amount of water—causing a drastic increase in concentration in the air. The carbon dioxide in the air will slowly dissolve in the water and change the pH of the water sample. Note that this change is only noticeable after a couple of hours but will intensify over half a day or more.

This second experiment is commonly used for hands-on ocean acidification experiments and is faster than the first experiment. However, it is less representative of the real-world phenomena. This time, the experiment is going backward. Carbon dioxide is being both produced and captured by the water, and the excess is entering the air.

The most noticeable indicator change occurs when using tap water. However, distilled water is useful to prove to students that the change in indicator color is from the reaction of water with the Alka-Seltzer tablet rather than contaminants in the water. Note that when demonstrating color change to students, it is best when they can compare with a sample of tap or distilled water with indicator in it. Having these controls samples prepared at the same time as the sample clearly shows that the change in indicator color happens due to conditions within the box rather than just over time in open air.

The oceans have changed from a pH of 8.16 before the industrial revolution (1850) to 8.07 in 2014. While this change may seem minor, it is about a quarter increase in the amount of acid; which is a drastic change in less than 200 years. This increase in acidity is due to increasing atmospheric carbon dioxide, which dissolves into the ocean—becoming carbonic acid. With the predicted increase in atmospheric carbon dioxide concentration, it is modeled that pH will drop to 7.96 if we follow the Paris agreement and 7.64 if we continue with our current emissions. That is a 190% and 230% increase in the amount of acid. Lots of common sea life have hard structures (skeletons or endoskeletons) made of limestone like coral, crab, lobster, mollusk, sea urchin, starfish, and sand dollars. All of these organisms require the oceans to be quite basic in order to form these structures. With our current emissions of atmospheric carbon dioxide, by 2095 all of the arctic and southern oceans and parts of the North Pacific Ocean will be acidic enough to make most of these organisms unable to form these structures. This will cause extreme disruptions in the oceans—especially when it comes to corals, which act as homes and the foundation for their entire ecosystem. Currently, this additional carbon dioxide is concentrated in the surface water, but between the next 300 to 1,000 years, this will start to be cycled throughout the deeper water of the oceans—affecting even more ocean communities. These disrupted ecosystems mean a loss of food, tourism, and ecosystem services for coastal communities globally.

For diagrams and photos continue reading in the expert background

To date, the ocean has dropped by 0.1 from its initial pH of 8.16, at the start of the industrial revolution, to 8.07. This may seem like a minor change, but a quick look at the formula for pH tells a different story.

Percent change in global average pH and hydronium ion concentration is relative to the 1850 value. 2100 values were found by using IPCC predicted values for atmospheric carbon dioxide concentration and models for ocean acidification developed by reference 3.

Why is it becoming acidic?

Why does this increase of carbon dioxide cause the entire ocean to acidify? The answer lies in the chemistry of carbon dioxide. Once it is in aqueous form, it goes through a series of reactions outlined below.

*Note that carbonic acid is a diprotic acid meaning it can lose two hydrogens.

Referring to the speciation curve above, at the current ocean pH carbonate would prefer to exist as bicarbonate which requires hydronium to react with (eq 6.)

Below is a well laid out diagram of the reactions outlined above. This diagram however, does not show carbonate coming from calcium carbonate explicitly but instead indicates deformed shells which are made of the ever increasingly dissolving calcium carbonate.

Calcium carbonate is what makes up the skeletons of corals and the shells of almost any hard-bodied marine organism you can think of. For these organisms to form these structures the water must be supersaturated with calcium and carbonate so that calcium carbonate forms. These ions are sparse in the vast ocean, so the formation of these crystalline structures requires that organisms bring these molecules together, rather than random chance. Ocean acidification shifts the equilibrium so that calcium carbonate dissolves more easily, making it more energy-intensive for these organisms to form and maintain their hard structures. However, in the future, if the oceans become simply saturated, or worse, undersaturated with respect to calcium or carbonate, most organisms will be unable to form these structures at all. This makes it hard for these creatures to survive, having a detrimental impact on the ecosystems that they are a part of.

Keep in mind that the severity of this depends on the species due to differences in the structure of their calcium carbonate at the molecular level. The most soluble form of calcium carbonate is aragonite which makes up the shells of mollusks and skeletons of warm and cold-water corals. Calcite is a less soluble form that makes up the skeletons or shells of some phytoplankton, foraminifera (shelled single-cell protists), starfish, sand dollars, sea urchins, and crustaceans (crabs and lobsters). Predictions of which oceans will be unsaturated in terms of aragonite and calcite over the next century can be found below. This clearly demonstrates that marine organisms using aragonite will be under threat in a much shorter time frame.

A large portion of the world’s population relies heavily on the ocean for their way of life and livelihoods. The loss of species that depend on calcium carbonate will have drastic effects across the ocean ecosystem and could lead to ecosystem collapse in many areas. This could remove ecosystem services and revenue that the ecosystem previously supplied to local populations. The loss of any species will disrupt the ecosystem, but the loss of keystone species upon which the ecosystem is built can be devastating. For example, warm and cold-water corals are not simply another species in the food web, but the basis of the entire ecosystem. This is because they form the ecosystem itself with all other organisms living in, on, and among them. Current predictions of the business-as-usual pathway (RCP8.5) show that 99% of coral will die by 2100 from a combination of factors. A significant factor being ocean acidification which will not only cause coral death but stop populations from recovering due to their inability to build a skeleton. Losing coral reefs will also mean a loss of their natural wave protection, food security, tourism, biological diversity, and natural beauty.

This might leave you wondering how the ocean has dealt with the natural sources of carbon dioxide prior to the start of the industrial revolution. While the ocean is a sink for atmospheric carbon dioxide, it does not remain there permanently. The full carbon cycle can be found in the image below. The process of carbon dioxide mixing throughout the ocean can take 300-1,000 years, and this must occur before it can enter sediment and be cycled back to the terrestrial systems. This means there are far reaches of the ocean that have not yet been affected by the increase in carbon dioxide, but also that much of the carbon dioxide being absorbed is staying near the surface, concentrating and causing more severe effects. Rather than cycling into deeper water, diluting the issue, our unrelenting carbon dioxide contributions will have severe effects on shallower water until the deeper water slowly becomes similarly impacted as it is cycled down in turnover. Carbon dioxide is less soluble at lower depths due to the high pressure which can lead to isolated upwelling into surface waters. 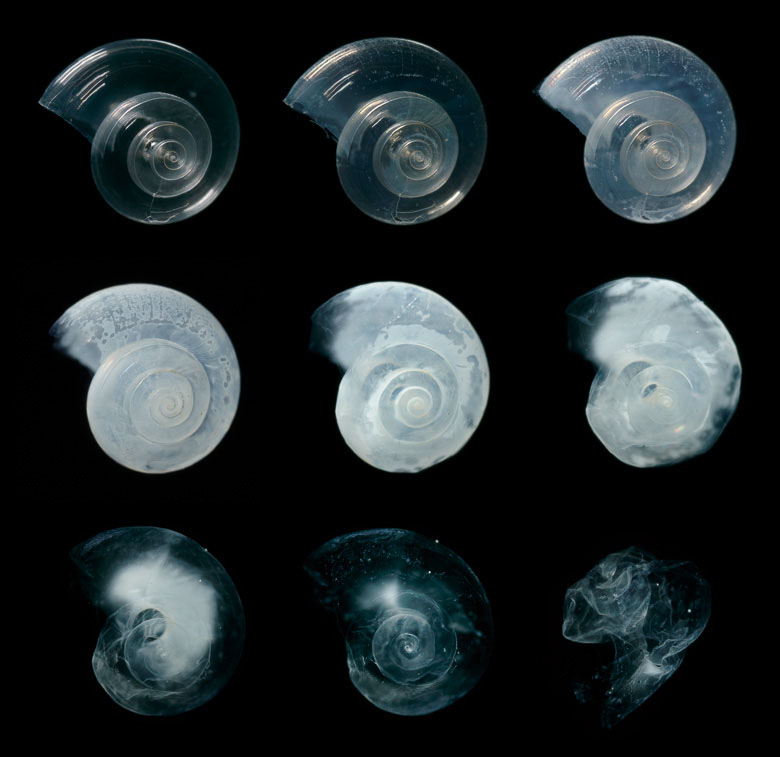