These coils come in pairs with the same number of turns of wire on each of the two coils. In "true Helmholtz" configuration: (1) the coils are wired in series with identical currents in the same direction in each coil, and (2) the coils are placed a distance apart that is equal to the radius of each coil. When in this configuration, they produce a very uniform magnetic field that is directed along their common central axis. One of the most common uses for such coils in science education is in determining the charge to mass ratio of electrons, accomplished by immersing an electron tube in the central region of the coils and measuring the resultant curvature of the electron beam.

Helmholtz coils are also used for a variety of other applications including, but not limited to:

Because of the wide applicability and use of Helmholtz coils, science labs with these coils would be quite instructive.  While Helmholtz coils can cost hundreds to thousands of dollars, it is possible in this maker world we now live in to easily and expensively construct them in just a couple of hours.  The pair of coils can then be used to investigate how the induced magnetic field is affected by their spacing.

Figure 1 shows the experiment setup for this science lab. The Helmholtz coils were constructed from two 12" outside-diameter styrofoam wreaths.  White duct tape was wrapped around the outside of the wreaths to provide a less slippery surface for the wire.  The tape was also used at four locations around the wreath to keep the wire from slipping off.  The wire used was 14 gauge solid insulated wire, with 10 turns of wire on each wreath.   Small 2x4 wood blocks were taped to the side of the wreaths to keep them upright on the table-top and provide a bit more stability.  A pair of binding posts (not shown in Figure 1) was mounted to each 2x4 and the two ends of the wrapped wire were connected to the binding posts.  The two coils were connected in series to a power supply, and were aligned so that their central axes coincide.  Since 14 gauge wire was used, a current of about 10 A could be used with only small heating of the wire.  PocketLab Voyager was mounted to the end of a 2' dowel rod, with the center of the dowel rod in line with the letter Z on the orange side of Voyager.  (The letter Z is very close to the location of the magnetometer on Voyager's internal circuit board.)  The other end of the dowel rod is attached to a clamp on a ring stand.  The dowel rod is visually aligned with the axis of the Helmholtz coils.   A basswood stick taped to the table allows moving the ring stand smoothly while keeping the dowel rod aligned with the coil axis.  A vertical white cardboard behind the Helmholtz coils serves as the origin for positions recorded by Voyager's rangefinder.  Voyager is connected via BLE (Bluetooth Low Energy) to a Samsung Android tablet running Phyphox software.  A graph of magnetic strength vs. position is created in real-time as Voyager is moved away from the white cardboard.  The graph shown in Figure 1 was produced when the coils were spaced a distance apart that is equal to the coil radius, i.e., "true Helmholtz" configuration.  As can be seen in the graph, this resulted in the production of a very uniform magnetic field in the region between the two coils.

An alternative version of this science experiment using only the PocketLab app, and not Phyphox, can be found by clicking here.

Phyphox (physical phone experiments) is a free app developed at the 2nd Institute of Physics of the RWTH Aachen University in Germany.  The author of this lesson has been working with a pre-release Android version of this app that supports BLE (Bluetooth Low Energy) technology to transfer data from multiple Voyagers to the Phyphox app.  Since then, a public Android version of the Phyphox app has been released.

The experiment of this lesson is in a file named HelmholtzCoils.phyphox and accompanies this lesson. This file can then be opened in Phyphox and will appear in the PocketLab Voyager category of the main screen, similar to that in Figure 2.

An accompanying pdf file, Lesson Details.pdf, explains how to work with the Phyphox software and suggests a method for analysis of the data.  Here is a video describing this Helmholtz coils science lab. 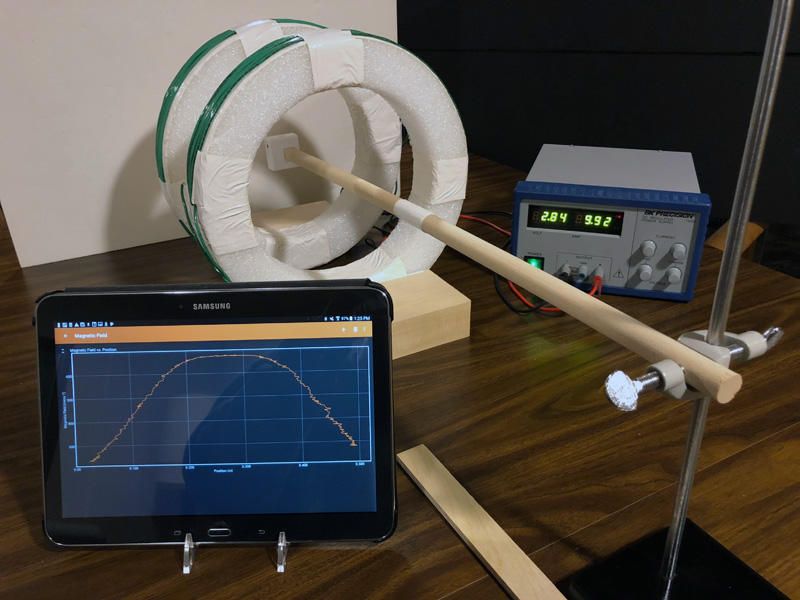