Have you ever been told not to follow too close to the driver ahead of you?  To keep a safe distance?  To abide by the "3-second rule"?  To keep a distance of at least one car length for every ten miles per hour of speed?  These questions all deal with the issue of stopping distance versus speed in order to avoid crashes.  A great way to investigate the relationship between stopping distance and speed is to interface Voyager with an "intelino® smart train".   Designed for all ages, intelino is intuitive with its app, has built-in sensors to provide an interactive experience for the user, and is easily programmed with color snaps that allow the user to control intelino's actions.

This section on theory is intended for high school students and is beyond junior high school students education.  This lab can be performed successfully without knowing the theory.   Imagine a railroad car gradually rolling to a stop.  It slows down because the track exerts a backward frictional force on the car.  The work W done on the railroad car by this frictional force f is given by

Now apply the work-energy theorem.  This tells us that the work done by the sum of all forces acting equals the change in the kinetic energy.  In mathematical terms:

Since the railroad car comes to a stop,

If v is the initial speed of the car and m is the mass of the car, then

In other words, the stopping distance  is proportional to the square of the velocity.

Figure 1 shows the author's setup for this lesson.  Voyager has been mounted to the top of the intelino engine using a 3M damage-free strip.  Voyager is set to measure z-magnetic field strength on the PocketLab app.  The intelino smart engine and at least one train wagon are at the far left end of a dozen straight tracks.   Custom action color snaps (white/magenta/green) are programmed to a speed of 30 cm/s using the intelino app.  The train is started moving in the direction shown by the blue arrow using the "autopilot" mode in the intelino app.  Two magnets 50 cm apart are used to measure and verify the speed of the train by dividing the distance between the magnets by the time between spikes in the magnetic field strength.  When the train reaches the built-in color snap command (white/yellow), that signals the smart engine to drop off the wagons on the go.  The engine continues to the left while the dropped off wagons gradually roll to a stop due to friction with the tracks.  A meter stick (white) is used to measure the stopping distance.  This process is repeated for intelino speeds of 40, 50, 60, and 70 cm/s.  At the instant of drop-off, the speed of the wagons is the speed determined from Voyager magnetic field data spikes and magnet separation distance.

The short 6-second video below shows a typical run of this experiment.  In particular, notice the spikes in magnetic field strength as the train passes the two red magnets.   Also notice the drop off of the wagons and how they slow down to a stop after the drop-off.  The stopping distance in this run was about 25 cm.

Stopping distance was averaged for three runs at each of the speeds.  Figure 2 contains an Excel graph of the speeds and corresponding average stopping distances.  The large yellow dots are the actual data points, and the dotted curve is a power regression fit to the data.  The R-squared value of 0.9984 shows a very good fit.  The power is 2.283, which is somewhat higher than the theoretical value of 2.  The relationship is clearly not linear, and is closer to a power of 2 than anything else.

intelino/PocketLab: Velocity vs. Impulse to Stop 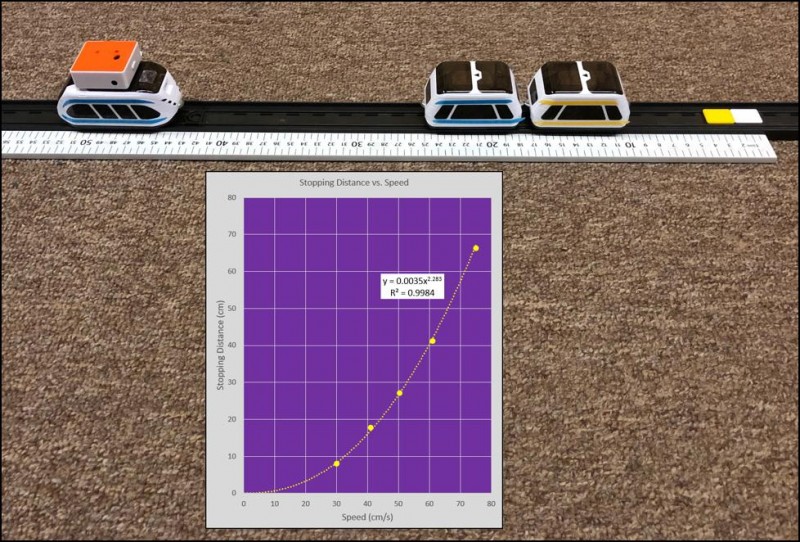 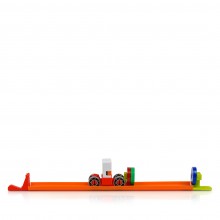 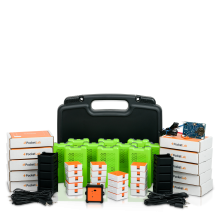