In addition to automobile features that promote road safety, there has been and continues to be a great deal of work on highway features that save lives.  An earlier lab entitled Crash Cushion Investigation, submitted by PocketLab, makes use of the PocketLab HotRod to investigate crash cushioning similar to that shown in Figure 1.

This new lesson presents an NGSS-based lab investigating impact protection for road hazards similar to the barrels shown in Figure 2.  The lab makes use of the PocketLab Mini HotRod.

The main items needed for this lab include PocketLab Voyager, a Mini HotRod, five pieces of HotWheels track, several Jenga (or similar) blocks and a dozen ordinary six-sided dice.  In addition, a piece of white cardboard and some double stick tape are required.  Figure 3 shows the complete equipment setup for this lab.  Jenga or similar blocks on the far left of the top image serve as the ramp height.  Intermediate blocks serve to stabilize the ramp.  A single Jenga block on the far right is anchored with double-stick tape and serves as the hazard that must be avoided for safety.  The two leftmost pieces of HotWheels track form the sloping ramp.  The remaining three pieces of track are anchored with double-stick tape to keep them from moving.  Pairs of dice serve as the "barrel cushions" that will be impacted by the Mini HotRod after it and Voyager are released from the top of the ramp.  The dice pairs fit perfectly in the space between the HotWheel track rails.  Alternatively, blocks of wood of similar size and shape could have been used.  The white cardboard on the far right serves as a reference point for Voyager's rangefinder as well as a wall for reflecting Voyager's IR sensor beam.

Here is a video with sound that shows the PocketLab Mini HotRod crashing into the cushions and hazard.  There are actually two major crashes.  The first is with barrels (dice) and the second (the worst) with the hazard.  The accelerometer graph in the splash image for this lesson shows these two crashes.

NGSS Science and Engineering Practices in this Crash Cushioning Lab

Asking Questions and Defining Problems -- Why are people injured or killed when colliding with road hazards?  What tools and technologies are currently used to reduce the effect of such collisions?

Developing and Using Models -- Students use a PocketLab Mini HotRod and dice "crash cushions" to simulate a model of collisions with road hazards.  What are some of the limitations of this model as a representation of real highway situations?  How might this model be refined to make it more realistic?

Planning and Carrying Out Investigations -- What are some questions that could be investigated in the classroom using the PocketLab crash cushioning lab?

With the wide variety of independent variables in this lab, student groups could select or be assigned specific investigations.

Analyzing and Interpreting Data; Using Mathematics and Computational Thinking -- How are you going to analyze and present collected data in a form that will communicate well to others?  Will you use the capabilities of spreadsheets for the production of tables, charts, graphs, and statistics?  Or will you make use of online tools such as PocketLab CloudLab and its capability for compilation of an entire lab report?

Obtaining, Evaluating, and Communicating Information -- If you have your students prepare lab reports or slide presentations related to their crash cushion experiments, do they use language effectively?  Do they include tables, diagrams, and graphs that validate their findings?  Do you have your students do any library or Internet research on "real-world" crash cushioning?  If so, can they effectively compare such research with their own crash cushioning lab experimental results?

CloudLab as a Vehicle for Obtaining, Evaluating, and Communicating Information

CloudLab provides a very effective way for your students to obtain, evaluate, and communicate the results of their crash cushion experiments.  If you are not familiar with CloudLab, it is strongly suggested that you read the short article "The CloudLab Model".  It will give you an overview of the structure of CloudLab.  Three lessons that show how to work with CloudLab are "Energy Conservation with a Mini HotRod", "Terminal Velocity vs. Area of a Falling Object", and "Rolling Resistance Lab: CloudLab/Mini HotRod". 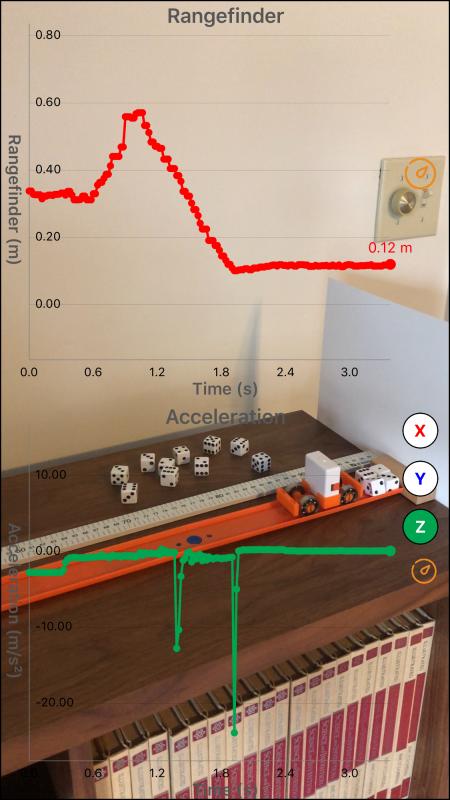