In this lesson you will be comparing the moments of inertia of two objects with identical masses.  You will  begin by making use of your maker skills as well as some basic math skills, including algebra and geometry.  You will construct two planar objects from card stock paper.  One of the objects will be a circular disk of radius 3.5".  The other object will be a ring whose outer radius is also 3.5", but whose mass is identical to the mass of the disk.  Figure 1 shows a diagram with two such objects.

You want to determine the thickness x of the ring, such that when two such concentric rings are taped together, the mass of the disk will be identical to the mass of the pair of concentric rings.  You will cut the disk and the two rings from three pieces of card stock paper.  You can assume that the card stock papers are of equal thickness with uniform mass distribution.

Okay, now apply those math and geometry skills to determine the value of x!  Then cut out the planar objects from card stock paper and assemble your ring.  If you have done your math correctly, the disk and assembled ring should be very close to the same mass when placed on a balance.

Now that you have your two objects of identical shape but with different mass distributions, you are ready for the first step in determining their moments of inertia.  You will treat each object as a physical pendulum--any rigid body that swings in a vertical plane about an axis through the body.  Figure 2 shows an arbitrary physical pendulum and its physical theory.  The equation in the box allows determining the moment of inertia I of any object about any specific pivot point on that object.  T, G, and d are all measurable, and g is known.

You will measure the period T with PocketLab's magnetometer.  A tiny magnet taped to the bottom of the physical pendulum will cause a sudden peak in magnetic field magnitude each time it passes by PocketLab while the pendulum swings back and forth.  Figure 3 shows pictures of the experiment setup for your two objects of identical mass.  In both cases, similar pivot points were selected--pivot points close to the edge of the object.  The pendulums are swinging from a metal rod that passes through small holes punched in the pendulums.  Use of a metal rod is desirable and helps to keep the pivot point low in friction.

To clarify the pivoting mechanism, Figure 4 shows an oblique view of the apparatus.  The pivot is a thin metal rod that has been clamped to a ring stand.  A wood dowel rod (or something similar) is used as well, since the clamp screw does not screw tight enough to pinch the metal rod to the clamp.  Safety goggles should be worn to prevent any possibility of being poked in the eye by the thin metal rod.

Success in this experiment requires precise measurement of the period T of each of your two pendulums.  PocketLab allows calculation of the period of the physical pendulum much more accurately than possible with a stop watch.  The use of PocketLab for this purpose eliminates errors associated with reaction times in starting and stopping a stop watch.  PocketLab should also be set to the highest data rate possible (50 points/second).  Make sure that you measure the time for several period and then find the average.  Figure 5 shows how this can be accomplished.

Tables of theoretical moments of inertia of a variety of shapes about their center of mass are readily available on the Internet.  These theoretical moments of inertia are determined by the use of integral calculus, the details of  which are not important in our investigation.  Figure 6 summarizes the theoretical moment of inertia equations about the center of mass for a planar disk and ring.  Our disk and ring, however, were not rotating about there respective centers of mass.  They were rotating about an axis very close to their outer edges.  Remember that the moment of inertia depends not only on the mass and how it is distributed, but also on the particular axis on which it rotates.

Additional PocketLab Lessons that Deal with Moment of Inertia

PocketLab Voyager: Moment of Inertia and Conservation of Angular Momentum 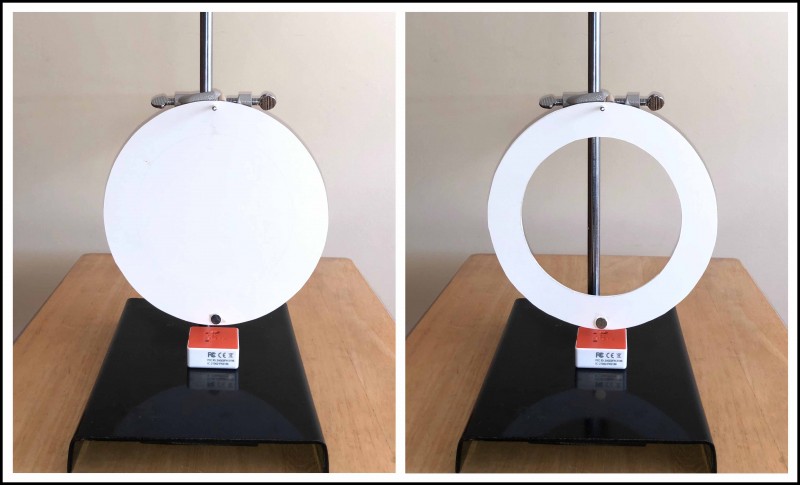