"The brakes on my car have failed and I can fix either the front or rear brakes.  Which set of brakes should I fix if I am concerned with stability against spinning while braking?"   This quote is from an article by W. G. Unruh that appeared in the October 1984 American Journal of Physics.  This is a perfect question for physics students to investigate with the PocketLab Mini Hot Rod!  The best approach is probably to have students make their predictions, perform an experiment while collecting data with the PocketLab app, and then compare their predictions with the experimental results.   Whether the predictions and vehicle braking experiment agree or not, students should then investigate the physics involved--perhaps by doing a Google search for information on the web.

Figure 1 shows a pair of Mini Hot Rods, one with front brakes and one with rear brakes.  The arrow shows the direction of motion of the Hot Rods.  The breaks (red) are simply 3D printed strips that fit snugly between the wheels and the Voyager holder.  A 3D printer STL file with these breaks accompany this lesson.  Alternatively, you could cut some cardboard or foam board pieces to serve as brakes.  Voyager has been inserted in an orientation such that if the Hot Rod spins while moving, it is the x-component of angular velocity that describes the spin.

Figure 2 shows the lab setup used by the author for the vehicle braking experiment.  A board a little more than a meter long is at an angle that provides a slippery slope for the Mini Hot Rod.  The Hot Rod with front wheel brakes is shown at the top of the ramp.  The Hot Rod is held stationary with an NSTA ruler until data capture with Voyager is ready.  Meter sticks taped along each edge of the ramp serve simply to keep the Hot Rod from going off the sides.  A towel at the far right provides a bumper to stop the Hot Rod at the end of the ramp.

In Unruh's 1984 American Journal of Physics article, he indicated that he presented his question to a large number of physicists.  The predominant answer, incorrect, was to fix the rear brakes!  Clearly, it would have been nice if PocketLab Voyager was available back then!

A brain twister in a 2001 book entitled Mad About Physics by Christopher P. Jargodzki and Franklin Potter also addresses this question.  They provide a concise explanation for the surprising answer.  Key to the explanation is the fact that for contact between the same two materials, sliding friction is always smaller than static friction.  The wheels with brakes are sliding, but the wheels without brakes are experiencing static friction, since the wheels are momentarily at rest at the location where they touch the road's surface.  As the car with rear brakes begins to turn ever so slightly, there is a net torque created by the sliding friction of the rear tires and the static friction of the front tires.  The result--the rear end of the car swings around to the front!  Clearly, vehicle braking is a complex subject.

Figure 4 shows a 3D image of the brakes for the Mini Hot Rod. An STL file accompanies this lesson. 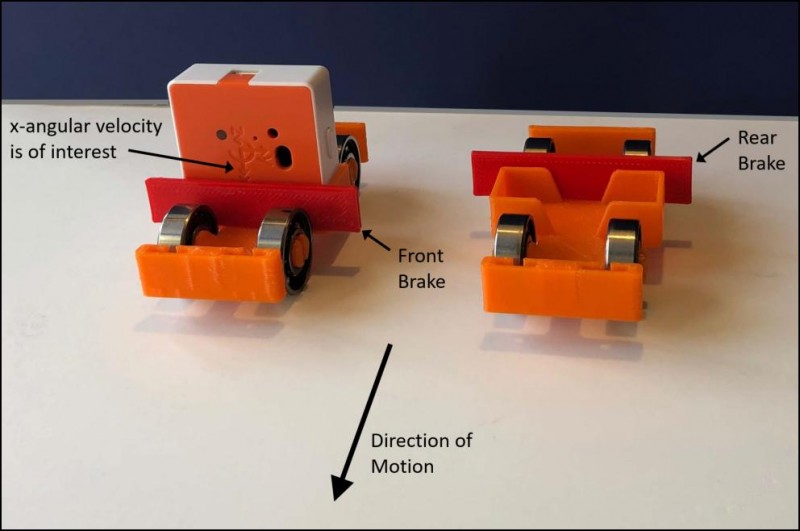 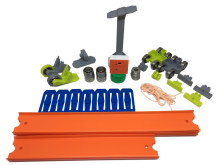 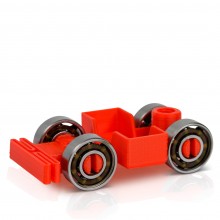 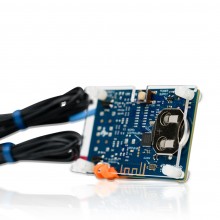