Think twice before discarding your school's empty 3D filament reels.  There's a good chance that you and your students could come up with some interesting physics lab investigations using these reels.  As shown in Figure 1, attach Voyager or PocketLab One to the reel, and the possibilities are endless!  This lesson describes a quantititive experiment that your students can perform in a study of the classic "unrolling spool problem".

Two different scenarios of the "unrolling spool problem" will be studied quntitatively in this lab.  Figure 2 shows the lab setup for scenario A.  A couple of meters of string have been wound onto an empty 3D 1-kg size filament reel.  The string emerges from the bottom of the reel as shown in the figure.   The string is kept horizontal to the tabletop.  The string loops over a pulley, and the loose end of the string is tied to three washers.   A wood block keeps the spool at rest, and it is quickly removed when z angular velocity data collection with PocketLab begins.  When first encountering this classic problem, students are often surprised to see that the reel moves to the right while winding up!  Students will learn how to explain this phenomenon by considering the torques involved.

Figure 3  shows the lab setup for scenario B of the "unrolling spool problem".  Here, the string emerges from the top of the reel as shown in the figure.   The string loops over a pulley, and the loose end of the string is again tied to three washers.  The height of the pulley is raised so that the string is again kept horiontal to the tabletop   A wood block keeps the spool at rest, and it is quickly removed when z angular velocity data collection with PocketLab begins.  In this senario, the string unwinds from the reel, as most students predict.  It is important to note that by keeping the mass hanging from the string to three washers in both scenarios, we also keep the tension in the string the same for both scenarios.

Figure 4 shows the torque analysis for scenario A.  If there were no static frictional force at point P, then the reel would spin counter-clockwise.  The static friction force f, however, acts as shown to oppose the spin.  Suppose that we consider torques about the point P where the reel is in contact with the tabletop.  There is no torque due to friction about this point since there is no moment arm.  The torque about P due to the tension T is clockwise with a magntude rT, where r is the difference between the outer and inner radii of the reel.  The string will wind up onto the reel, while the reel rolls to the right.  (The inner radius is the radius of the cylinder upon which the string is wrapped.)

Figure 6 shows the torque analysis for scenario B.  The torque about P due to the tension T is counter-clockwise with a magntude rT, where r is the sum of the outer and inner radii of the reel.  The string will unwind from the reel, while the reel rolls to the left.

The short 7-second video below shows PocketLab data collection for scenarios A and B.  A narrow black strip of tape on the reel makes it easier to see the rotation of the reel.

The Quantitative Aspect of Our Unrolling Spool Problem Lab

In both scenarios of the "unrolling spool problem" the tension T is the same, and the rotational inertia I of the reel is the same.  Since torque equals Iα, where α is the angular acceleration of the reel, then

What we have is an equation that gives us the ratio of the accelerations in scenarios A and B in terms of the inner and outer radii of the  reel.  For the reel used by the author, the inner radius was 2" and the outher radius was 4".  Therefore, the ratio of accelerations would be (4 - 2)/(4 + 2) = 2/6 = 0.33.  This compares well, to within 7%, of the value 0.35 obtained from the PocketLab acceleration data.

1.  Consider the three additional scenarios shown in Figure 8.  The tension T in the string is in different directions for each of these scenarios.  Determine the torque about the contact point P for each of these scenarios.  What will be the direction of rotation in each case?  Scenario C should be easy to perform in the lab.  With a little of ingenuity, you should be able to come up with a setup to actually perform scenarios D and E.  Note that scenario E actually shows that there is a second critical angle.

2.  With reference to Figure 5, derive an equation for the critical angle in terms of the inner and outer radii.  The answer is: 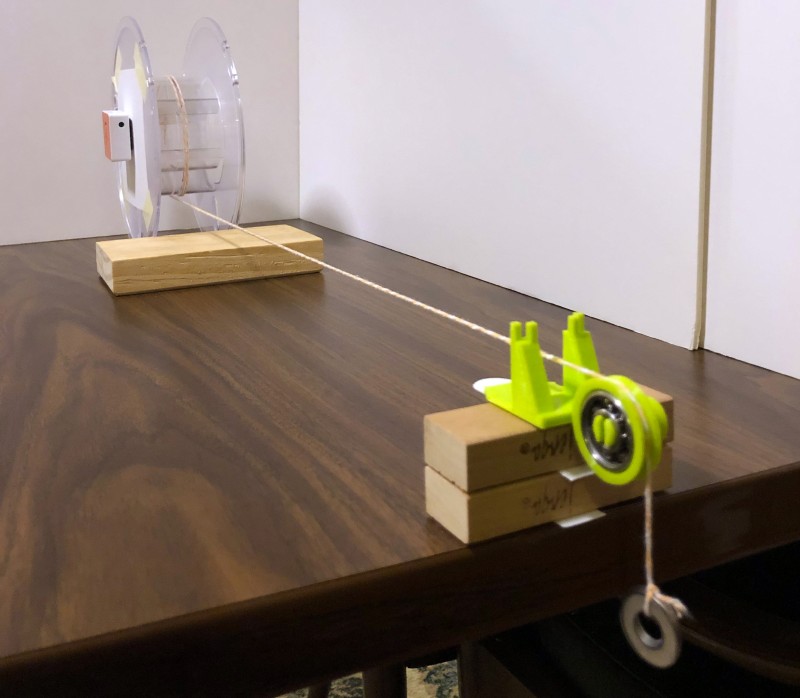