Pi from Voyager and an Intelino Smart Train

There is probably no number that has received more interest since ancient times that the number pi, symbolized by the Greek letter π.  Originally defined as the ratio of the circumference of a circle to its diameter, it has been given approximate values including 3.14 and 22/7.  Proven to be an irrational number, supercomputers have computed the value of pi to more than one trillion digits.

With this background in mind, what better number could there be to investigate with Voyager than the number pi?  Mount Voyager to the top of an "intelino® smart train" and you have the perfect combination for a math activity for 4th grade through junior high school students.  What's an intelino smart train, you ask?   Designed for all ages, the intelino smart train is intuitive with its app, has built-in sensors to provide an interactive experience for the user, and is easily programmed with color snaps that allow the user to control intelino's actions.

In this lesson, students will interface PocketLab Voyager and an intelino smart engine to determine an approximate value for pi.  Students will also calculate the percent error in their value and use critical thinking to explain possible reasons for the error.  Clearly, this activity supports STEM as well as NGSS practices.

The Voyager/Intelino Equation for Pi

An approximate value for pi will be determined from magnetic field data collected by the Voyager app, mounted to the top of an intelino smart engine, as they pass by magnets serving as timing gates.  No meter sticks or other measuring devices are used.  Your students will time two events:

By definition, π is the ratio of the circumference C of a circle to its diameter D, π = C/D.  If the speed of the intelino engine is kept the same for both the circle and the straight track, then the distance traveled would be proportional to the time, i.e., C/D = Tc/Td.  Therefore, we can compute the value of π by finding the ratio Tc/Td of the two times!

Now with an experimental value for π, the percent error can be calculated by the usual method for computing percent error:

Finally, a discussion regarding possible reasons for the error would be in order.

Figure 1 shows the setup for this lab.  Voyager has been mounted to the top of an intelino engine with a 3M damage-free strip.  The figure shows Voyager/intelino on a length of straight track for which a pair of red magnets have been placed a distance apart equal to the diameter D of  the circular section of track.  Each end of the straight section of track has a built-in color snap command (white/blue) that instructs the engine to reverse itself.  The engine is turned on with its front facing to the right and the start button is pressed to get the engine moving to the right.  Each time Voyager passes a  magnet, there is a peak in the magnetic field strength, as shown in the bottom graph.  The time between adjacent pairs of peaks is the value of Td.  It is suggested that students measure several of these times and take the average as their value for Td.  Note that the poles of the red magnets have been oriented so that both peaks are in the same direction (down).

After collecting data on Td, the engine is placed on the circular track.  The yellow magnet serves to identify each time that the engine has moved one complete circumference.  The time between peaks is the value of Tc, as shown in the graph at the top of Figure 1.  Again, students are encouraged to measure the time for several circumferences and divide this time by the number of circumferences to find an average value for Tc.  Note that the poles of the yellow magnet has been oriented so that the peaks point up, helping to distinguish them from the diameter peaks, that pointed down.

The short 19-second video below shows how easy and quick the data collection is for the Voyager/intelino pi lab.

The author of this lesson obtained a value for Tc of 4.265 seconds and a value for Td of 1.32 seconds, giving a value of π = C/D = Tc/Td = 4.265 s/1.32 s = 3.24.  Compared to the accepted approximate value 3.14, this is an error of about 3%.  The biggest issue that students are likely to encounter is where to place the two red magnets so that they are exactly one diameter apart.  Is the diameter the outer diameter or track, the inner diameter, or something between these values?  A small change in the distance between the red magnets can have a significant effect on the value obtained for pi. 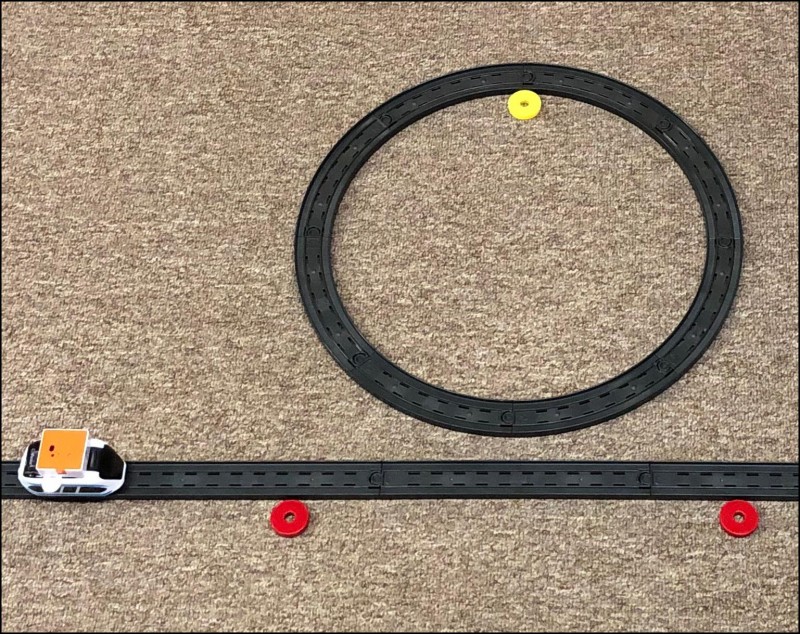