Car crashes are a dangerous example of Newton's Third Law. The car exerts a large force on the wall and the wall then exerts a large force back onto the car. Civil engineers are always trying to think of new ways to make highways safer. Building crash cushions along highways that reduce the impact force of the collision will, according to Newton's Third Law, also reduce force experienced by the passengers of the car. This can save lives. But how should these crash cushions be designed?

Your group is a team of civil engineers that work for the Department of Highway Safety to make roadways safer. Using the available supplies, and the principals of Newton's Third Law, your group must design two model crash cushions and test which model would be better to build for the highway. You will test each model crash cushion design by collecting acceleration data with PocketLab Voyager. Using the data collected from your crash cushion models, you will then draw a conclusion about how to design the best real-world crash cushion to make car crashes safer.

This investigation is aligned with NGSS MS-PS2-1. For a more detailed description of the alignment, along with example data and results, see our lesson on how to teach NGSS Newton's Third Law.

How should crash cushions be designed to help make car crashes on highways safer? How does the design relate to Newton's Third Law of Motion.

Students will be able to:
-Design two solutions for a crash cushion that will reduce the impact force experienced during a car crash.
-Use scientific reasoning and evidence collected during the investigation to determine which solution is better at making car crashes safer.

Part 1
Newton’s Third Law of Motion states: For every action, there is an equal and opposite reaction.

In the cart crash, the cart crashes into the wall and exerts a force on the wall. How does Newton’s Third Law of Motion relate to the impact force experienced by the passengers in the car? Discuss your answer with your group and then write a response that says how the diagram final vector arrow (Fwall on cart) on the diagram should be drawn.

Momentum:
Momentum is the product of an object’s mass and velocity. We can think of momentum as inertia in motion.

In this experiment, you will control the cart’s mass and velocity and therefore its momentum going into the crash.

Impulse:
Impulse is the change in momentum of an object. Whether you are using a crash cushion or not, the change in momentum of the cart will always be the same. If your experiment is properly controlled, the cart will crash with the same momentum and then, after the crash, come to a stop with no momentum. Therefore, if the cart is crashing directly into the wall or the into any of your crash cushions, the impulse for every crash will always be the same.

The cushion cannot change the velocity or momentum of the cart before it crashes, so it can’t change the impulse. However, an effective crash cushion will still find a way to change the force (F) in the equation above, even when the impulse cannot be changed.

Set-up your materials as shown in the diagram.

For every new run, you will change the independent variable but keep a set of control variables the same. This is to make sure that the experiment is accurate. Respond below to record your control variables.

1) For every run, what will be the angle of the ramp?

2) For every run, where will the cart be placed on the ramp?

3) For every run, what is the distance the cart will travel between the bottom of the ramp and where the crash begins?

What is the Independent Variable in this experiment?

What is the Dependent Variable in this experiment?

Control Run
Run 1 is a control run. You will crash the cart into a wall with no cushion. Perform three trials. Determine what in your collected data should be your Trial Result. Enter that into the Trial Results for every trial. You can also add additional notes to the Trial Notes.

If you wanted to make cars safer during head-on collisions with other cars, what would you design the front of the car to do at impact? Relate your answer to your conclusions about crash cushion? 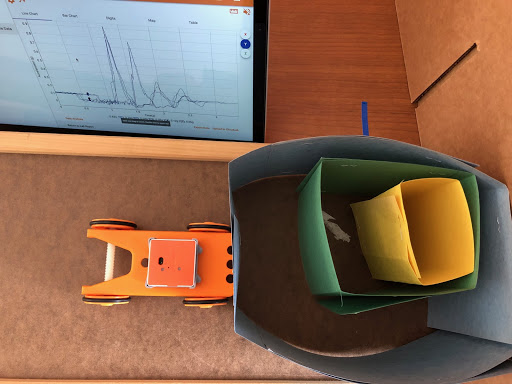