The purpose of this lesson is to challenge your students to design an experiment for which data from PocketLab Voyager is used to determine the "floor-it" acceleration and maximum speed of the intelino smart train engine.  Required data should be obtained in a single run of data collection by the PocketLab app.  Figure 1 shows a picture of Voyager attached to the top of an intelino smart engine.  Designed for all ages, intelino is intuitive with its app, has built-in sensors to provide an interactive experience for the user, and is easily programmed with color snaps that allow the user to control intelino's actions.

A Solution to the Challenge

There are surely a variety of possible solutions to the challenge of this lesson.  The solution by author of this lesson is presented here.  Figure 2 shows the setup.  PocketLab Voyager has been mounted to the top of an intelino engine with a 3M damage-free strip.  Voyager is oriented with the positive x and z axis directed as shown.  The data rate is set to 50 points/second.  Voyager's accelerometer records the x-acceleration as the engine takes off from rest, after putting the "pedal to the metal".  Voyager's z-magnetometer records peaks in magnetic field as the engine passes magnets spaced 25 cm apart.  With the magnets acting as gates, the maximum speed of the engine can be determined by observing the time between magnetic field peaks in PocketLab app data.  Upon passing the final magnet (red), engine-braking with the throttle brings the engine to a quick stop.

Figure 3 shows the intelino dashboard in manual mode, in which color action snaps are inactive.  The accelerator is on the far right and is shown at maximum speed.  According to the intelino developer, the maximum speed is 100 cm/s, but this challenge will not assume this.  Rather, the solution will measure the actual speed with PocketLab Voyager.  Putting "the pedal to the metal" is accomplished by quickly moving the accelerator from the bottom to the top as fast as possible.  In order to stop the engine as fast as possible, the accelerator is moved from the top of the bottom as quickly as possible.  We might call this intelino engine braking.

The short 6-second video below shows a typical run of the author's challenge solution.  The setup is quick and easy, leaving plenty of time for data analysis.

Figure 4 shows an Excel graph created from Voyager data collected by the PocketLab app.  The blue line is acceleration in cm/s/s.  The orange line is magnetic field data.  In both curves, the independent variable is time in seconds.  The maximum speed calculation, shown in orange, indicates a speed of 96 cm/s, about 4% below the maximum speed indicated by intelino developers--a reasonable discrepancy.  Maybe the extra weight of carrying Voyager reduced the maximum speed of the engine a little bit.

The red text shows calculations related to the engine braking used to stop the engine as quickly as possible.  Once again, a direct reading of the graph shows a maximum deceleration of about 350 cm/s/s, about a third of that of gravity.  The average deceleration is about 213 cm/s/s.

For a quick listing of all Voyager/intelino lessons click here. 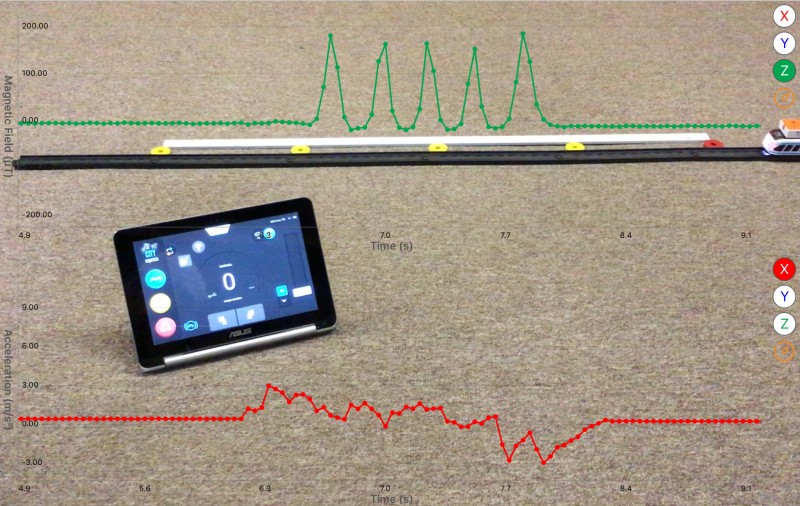