How to teach NGSS MS-PS1-4: Particle motion and states of matter

In a few simple experiments, temperature can be related to the the kinetic energy of particles inside a substance, or the the transfer of thermal energy from one object to another through kinetic energy in order to teach NGSS MS-PS1-4. In doing these experiments, students can gain an understanding of how particle motion is affected when thermal energy is added or removed. This can also be related to the changes of state of a substance as a solid, liquid, or gas.

NGSS MS-PS1-4 specifically states:
Develop a model that predicts and describes changes in particle motion, temperature, and state of pure substance when thermal energy is added or removed.

Gay-Lussac’s Law - Temperature and pressure are directly proportional
The most directly connected lesson on the PocketLab Educator page is listed as lesson 1 in the links below. However, the other activities also can help students develop a qualitative model of what is happening in a substance on a molecular level. Most of the experiments involve measuring the barometric pressure of a gas in a sealed container. Students then add thermal energy to the container and observe the change in pressure. The added thermal energy will increase the kinetic energy of the particles in the gas, causing an increase in barometric pressure. As more heat is added, the pressure increases proportionally. Students can then work to develop a model that can predict the pressure of the gas given certain temperatures. Gay-Lussacs Law is the gas law that shows that the temperature and pressure of a gas are directly proportional.

Boyle’s Law - Volume and pressure and inversely proportional
In other related activities, students can change the volume of the gas to see how the pressure changes. This does not directly align with NGSS MS-PS1-4 as students aren’t adding thermal energy. However, as they see how the pressure increases and decreases with changes in volume, it will help them think about what is happening with the particles in the gas. If the volume of the sealed container is decreased, the kinetic energy of the particles does not change, yet the pressure increases. Students can design and develop models by drawing diagrams to show why this occurs. Designng and Developing Models is the Science and Engineering Practice in NGSS MS-PS1-4.

The Science and Engineering practices in NGSS MS-PS1-4 ask students to develop a model tp predict and/or describe phenomena, In this case, the phenomena they need to describe is how particle motion relates to thermal energy. In the first lesson link below, students create a model of the phenomena by using the evidence they collected to draw diagrams of the particle motion fo the gas at different temperatures. In the second lesson linked below (and as an extension in the first lesson), students create a model by graphing pressure versus temperature data. They can then use that graph to predict pressure changes at different temperature.

For lessons 1 and 2:
PocketLab Voyager or PocketLab One
Mason/Canning Jar
Heat Lamp

For lessons 3, 4, and 5
PocketLab Voyager or PocketLab One
Large Syringe or Bell Jar with Syringe

NGSS MS-PS1-4 Performance Expectation:
Develop a model that predicts and describes changes in particle motion, temperature, and state of pure substance when thermal energy is added or removed. (Clarification Statement: Emphasis is on qualitative molecular-level models of solids, liquids, and gases to show that adding or removing thermal energy increases or decreases kinetic energy or the particles until a change of state occurs. Examples of models could include drawing and diagrams. Examples of particles could include molecules or inert atoms. Examples of pure substances include water, carbon dioxide, and helium).

Science and Engineering Practices
Developing and Using Models Modeling in 6–8 builds on K–5 and progresses to developing, using and revising models to describe, test, and predict more abstract phenomena and design systems.

PS1.A: Structure and Properties of Matter 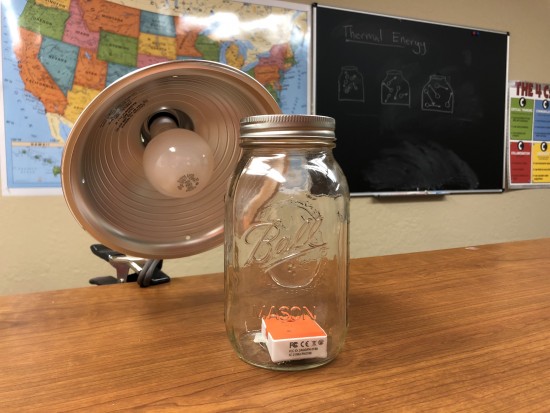